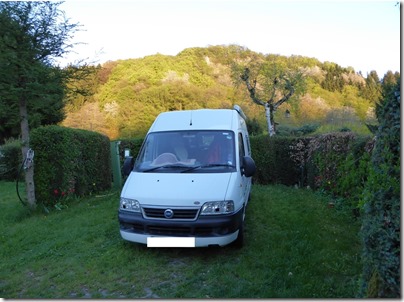 We left England with quite a few reference materials but one of the most useful for the journey to Croatia was the ACSI App covering 1242 campsites in Europe. It didn’t need WiFi like some maps, though it’s best to have a good WiFi connection to download the frequent updates, and so when we started feeling like it would soon be time to stop, we just had a look at the App and found out where there was a choice of a couple of campsites not too far from the motorway, roughly where we thought we might end up in an hour or so.

The App, which you have access to for as long as your ACSI subscription lasts, provides plenty of useful detail on the campsites, including reviews, tells you the distance from your current location and gives you directions on how to get there. So it eliminates all the stress of trying to plan each day to be at a certain place in a certain time slot. Brilliant. Of course you have to pay the annual fee for your ACSI card, but that got me a few discounts even though it’s really aimed at couples rather than one woman and a dog. You also get a couple of meaty directories with all the campsite details in print – I did have a read before I left, and took them with me, but I did not look at them once on the trip. It’s also often possible to leave your ACSI card (which has your name and address on it) with reception instead of your passport (this happens a lot in Croatia) and you know that if you’re staying in an ACSI listed campsite you have a pretty good idea of how much it’s going to cost in advance and that the cost is not going to be excessive.

For more details go to Camping Card ACSI and if, like me, you want as much freedom and flexibility as possible, this is one of the best tools for finding the kind of campsite you want, when you want it, and well worth the roughly £19 investment.

So…after not very much sleep and a very early start in Folkestone, and despite a quick nap on Eurotunnel and a couple of leisurely stops in Belgium, we were flagging at about 6pm, consulted the ACSI App, and arrived at Campsite Eisenbachtal in Girod, Germany, just 5 kilometres from exit 41 of the A3 motorway.

Met by a very charming, laid back and helpful owner, we quickly installed ourselves in our allocated pitch (one of the few campsites on this trip that actually allocated a pitch rather than leaving us to find my own) and proceeded to explore. Barnie the dog was quick to jump into the big lake (there’s also a smaller one) and we discovered two hotels on our twenty minute walk around the lakes – one very posh one that gave the distinct impression that campers were not overly welcome, and one completely the opposite that also made their WiFi available for campsite guests (WiFi was not available at my pitch). Just by our campsite were lambs and horses and there were plenty of walks signposted so it would be a great spot for a longer, rural type, stay with the two nearby hotels providing alternative food and drink options.

The pitches were great and had mesh in the grass to keep them well drained. Also individual water pipes though I was a bit confused as to which provided drinking water – probably just me. The facilities were also fine though the showers needed tokens costing fifty cents which provided 4.5 minutes water. The owner gave me a free token when I arrived so at least I knew the situation – elsewhere, most of the time, I was left to find out myself when I arrived at the showers without any
change.

Overall I’d say, not least by the number of children and play areas, that it’s a good family stop for a few days and not so much a transit stop. It cost me €14 all in, including electrics and dog – not the cheapest of the trip but pretty good value and an excellent first night find.