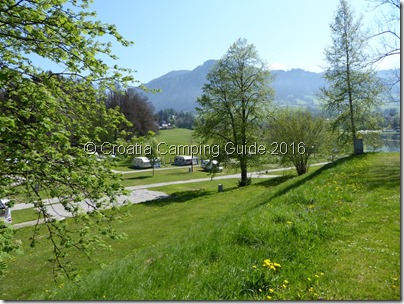 We’ve never stayed overnight in Austria before and the scenery is so stunning we decided to stop a little early to admire it for longer. So, at about 4 15, and after consulting our ACSI App (see the last but one posting - Croatia Camping Guide - Day 1 & ACSI Card), we arrived at the magnificent location that was Camp Putterersee – lakes, mountains, green grass, sunshine…..all it needed was the von Trapp family running down the hill singing The Sound of Music.

It’s by a small settlement called Aigen im Ennstal, near Liezen, between the two main motorways – A9 and A10. According to Wikipedia, it was one of the locations in the classic film – Where Eagles Dare. - and if you’re interested in the journey on Day 3, and how we got there, read Croatia Online - Driving To Croatia Day 3.

Reception at Camp Putterersee did not open till 7 but, with the guidance of another camper, we chose our pitch, connected our hook up, and wandered down to the lake. It really is a lush and spectacular setting and the facilities were clean and modern. There are some nice touches too, including a dog shower and pedestals under the water taps so you can put your bottles on them. 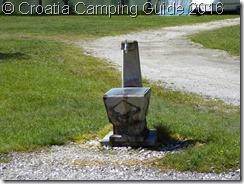 For more information, go direct to Camping Putterersee or have a look at what Acsi says about them on ACSI Details and Reviews