Driving To Croatia Day 4 – We’re There! 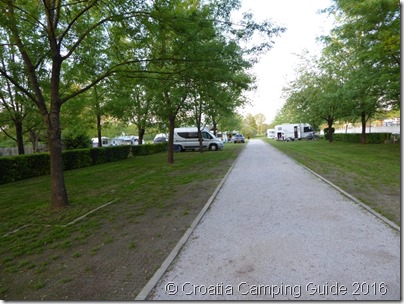 You can read all about the last day of our drive to Croatia from Suffolk on sister site, Croatia Online , together with a few final tips on the journey. Only 1,000 miles from Eurotunnel, we arrived at Camp Slapić (pictured), in Croatia, in four easy days after plenty of fun and a few great campsites on the way.

As reported in the above mentioned posting, we decided to stay at Camp Slapić, rather than continue along to the Istrian coast, for no better reason than because they announced themselves periodically on signs on the motorway and it saved us having to think about when and where to stop. Not only was it well signed on the motorway but signage and directions were pretty good when we took the turn off indicated – just as well really because it’s quite a long way and not the 5 kilometres they suggest. And I’m sure that about 5 km after one sign saying it was 5km away there was another sign saying exactly the same thing! We began to lose heart a little as we went through a tiny village and seemed to be nowhere very special but on we went. Our persistence was well rewarded and it turned out that the first Croatian campsite we had turned up at, serendipitously, just happened to be the 4 star winner of the Croatian Camping Union’s Best Campsite Award from 2012 to 2015 inclusive. Nothing like starting at the top, and the way we meant to carry on.

Not only was it a high achiever in terms of awards but also reasonable value for money, costing 125 kunas in total, broken down as follows: pitch, camper - 55kn; adult – 30kn; electricity - 20kn; dog - 15kn; local taxes – 5kn It’s a family owned campsite and the young man who welcomed me was full of smiles and a can do attitude. This was illustrated by the relaxed attitude to the following day’s departure time, on the basis that they were not full so it didn’t matter too much - a far cry from the cool, stuffy and formal response you might find in the swish receptions of some other allegedly upmarket Croatian campsites.

The facilities are great – clean and modern – though it was a little weird that all toilets had locks that needed keys on them and each camper was given a key to unlock them. Must be a real pain for the cleaners. There’s also an ok restaurant and bar surrounded by rushing river water. The food was fine and the waitress service was pretty good, though she brought my food out and left it, while I was dashing back to my camper for a jumper, even though I had forewarned her I would be absent for a couple of minutes. That was made slightly more irritating by the fact that the chef had taken an age to cook it, even though I seemed to be the only one eating at that time.

As for the location, that was pretty special too, right by the river River Mrežnica about 50km south of Zagreb and 10km away from Karlovac.. Canoeing, kayaking and cycling are popular leisure activities and there are mobile homes if you haven’t brought your own camping accomodation with you. You can find pretty well all that you need on site with a couple of small villages near by.

However I was not  impressed when, the next morning, the waitress from the night before, who was at the bar a few yards away from the restaurant balcony, must obviously have realised (not least by my shouts to the dog) that I was wading, waist deep, through rushing water, rescuing my dog from an ill judged attempt to cool down, but turned a blind eye. Worse, a rather large eastern European guest, sitting right by the water and within two yards of the location of my dog rescue beneath him, also looked the other way and said and did absolutely nothing. OK, I probably should have taken more care to prevent my dog from getting into trouble, but surely a few words of “encouragement” would not have gone amiss as I manfully waded from one handhold to the next, to rescue a rather shaken mutt who nonetheless had the good sense to obey my screams of “STAY” after he managed to paddle onto a mound above the level of the rapids. Neither of the silent observers would meet my eyes as I dripped back to my campervan to change, and the whole episode delayed our departure by an hour. Fortunately I had my waterproof Craghoppers on and my mobile phone, despite being in a submerged thigh pocket, remained mostly dry. Looking on the bright side, the dog normally has a near death experience on our big trips (and no, I am not a reckless or careless dog owner) so I was pleased to get it over with early. 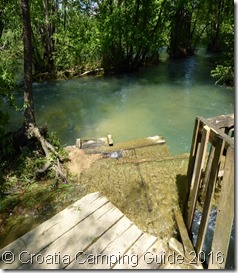 This picture shows the scene of the adventure but does not do justice to the speed of the water flow – the rescue was achieved by hanging onto the bottom of the restaurant balcony (on the right of the photo) , manoeuvring round, using a series of handholds on the overhanging balcony structure, to a mound the dog had managed to clamber onto, lassoing the dog and then dragging him back to dry land  using the same hand holds. This was now much against his will as he had no wish to re-enter the deep and fast flowing water.

It had rained a lot quite recently, apparently, and some of the grass pitches were a little muddy, with not a lot of hard standing pitches. However they were a good size and nicely delineated with trees and bushes. All in all a really good place to stay unless you need to be rescued from the surrounding rapids! And on that note I would say in mine and my dog’s defence that it is/was quite easy to fall in on the then broken boardwalk that surrounded the restaurant terrace. However in the interests of fairness and in the defence of Camp Slapić, I was too wet and worn out to challenge anyone after our adventure and just quietly slipped away to change and then leave..